FitEarner is a fictional company that launched a family and friends fitness tracking app three years ago. The app features a team component that allows members of a team to see how others within the group are doing regarding their fitness goals. Currently, there is no messaging feature within the app, but stakeholders believe that if team members have the ability to message individuals or their entire team, engagement and metrics will increase.
Problem
User engagement is heavy for the first three weeks, but then it drops off and users delete the FitEarner app soon after. 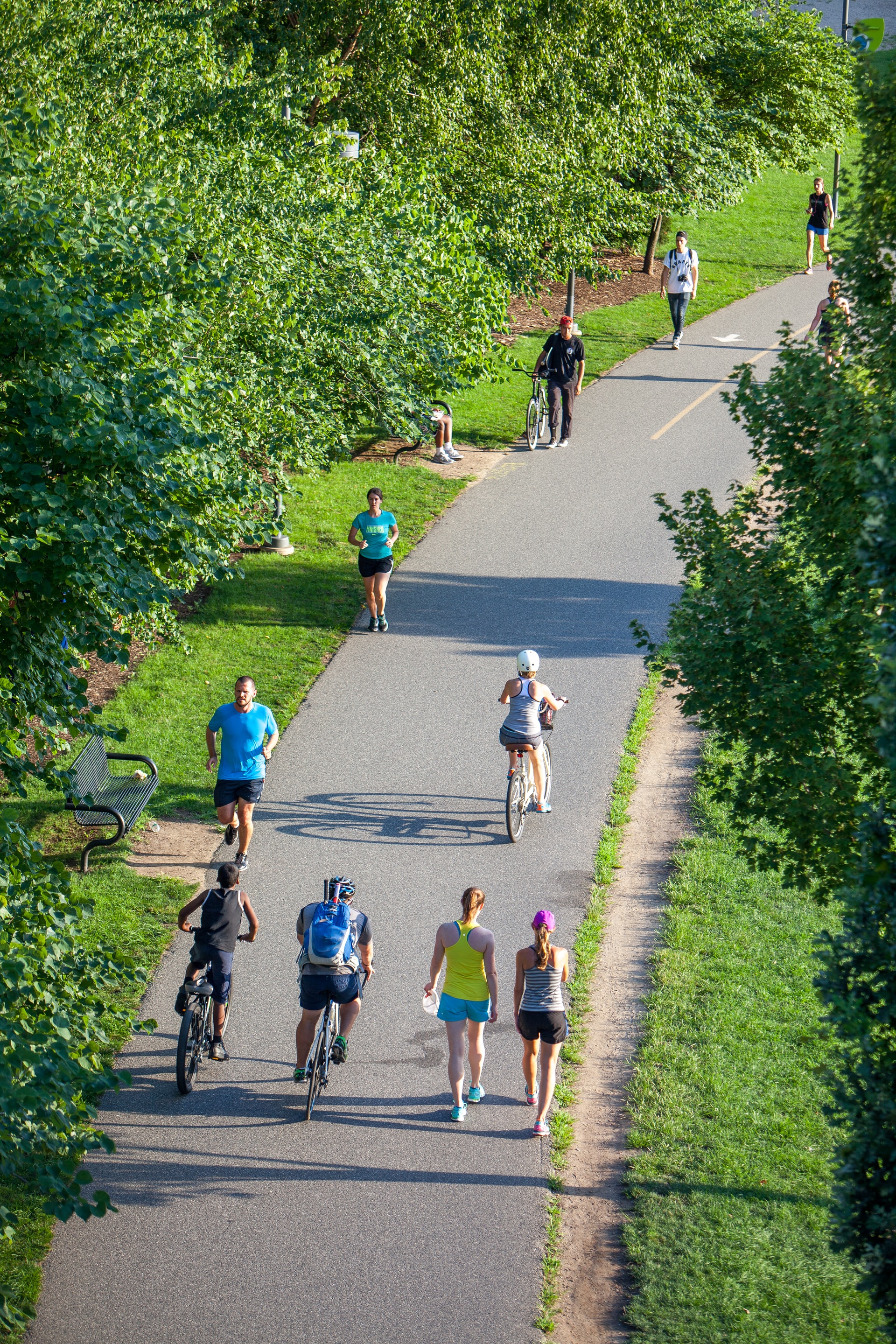 1. User Interviews: Learning About Target Users
Because understanding user needs plays a critical role in thinking about what will increase engagement, I conducted 3 user interviews with people who fit the following target user characteristics:
They also have used or are currently using fitness apps. These interviews helped me understand why people use fitness apps, why they might stop using them, and how they would benefit from group interaction on the app.
2. Competitive Analysis: How do other fitness apps incorporate messaging?
The three most popular fitness apps that people talked about during user interviews were MapMyRun, MyFitnessPal, and FitBit. I did some research on these well-established apps in order to understand how they incorporate messaging features.
Competitive Analysis of Industry Leaders' Messaging Features 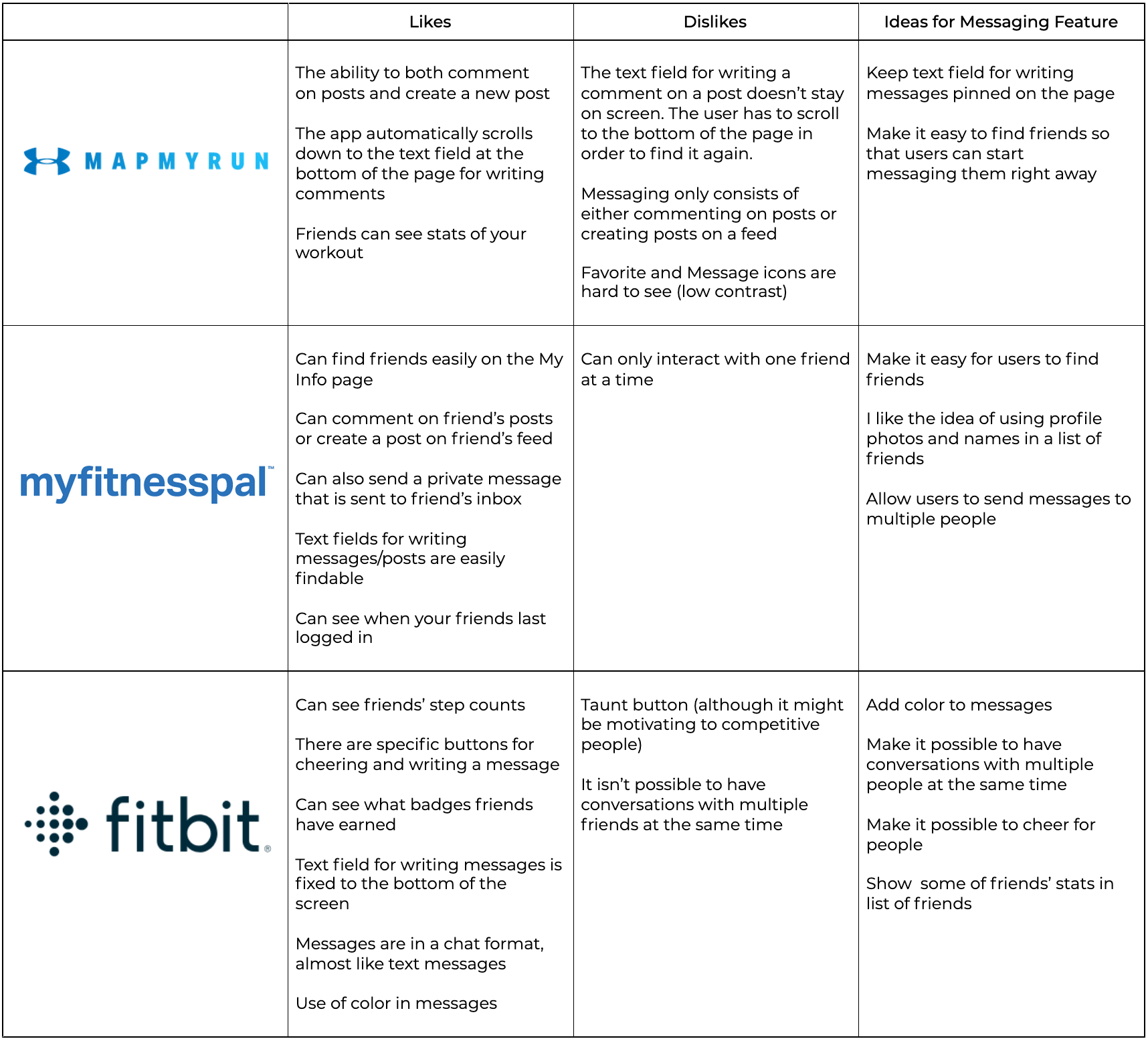 1. Affinity Mapping
Affinity mapping helped me discover themes and trends about how people use fitness apps.

Key Findings
2. User Persona: Who would benefit from a team-focused app?
The key findings helped me to develop a persona, which served as inspiration for designing FitEarner’s messaging features. 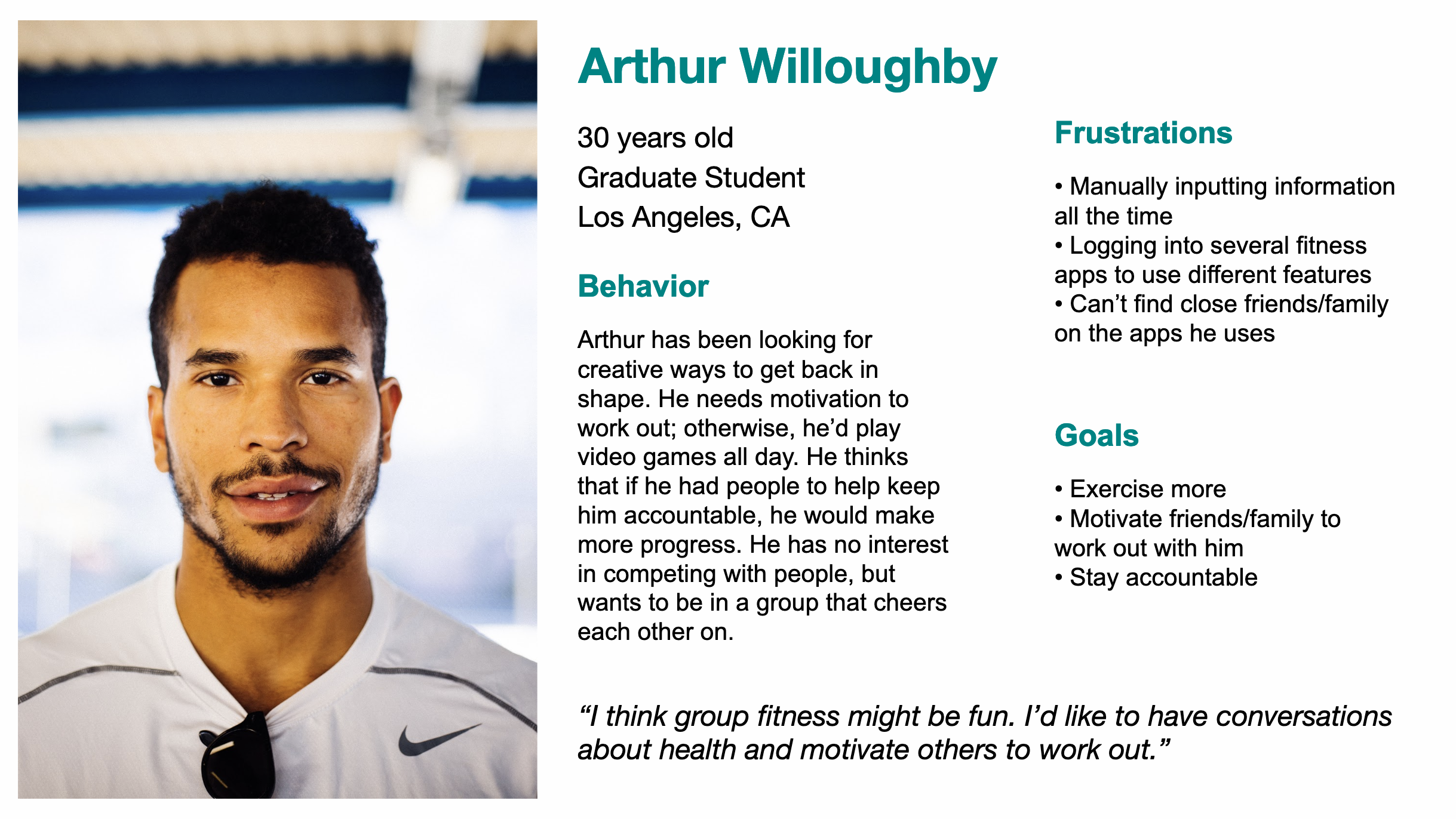 Setting Up the Structure
User flows helped me figure out how users would achieve certain tasks, like creating a team and sending a message. 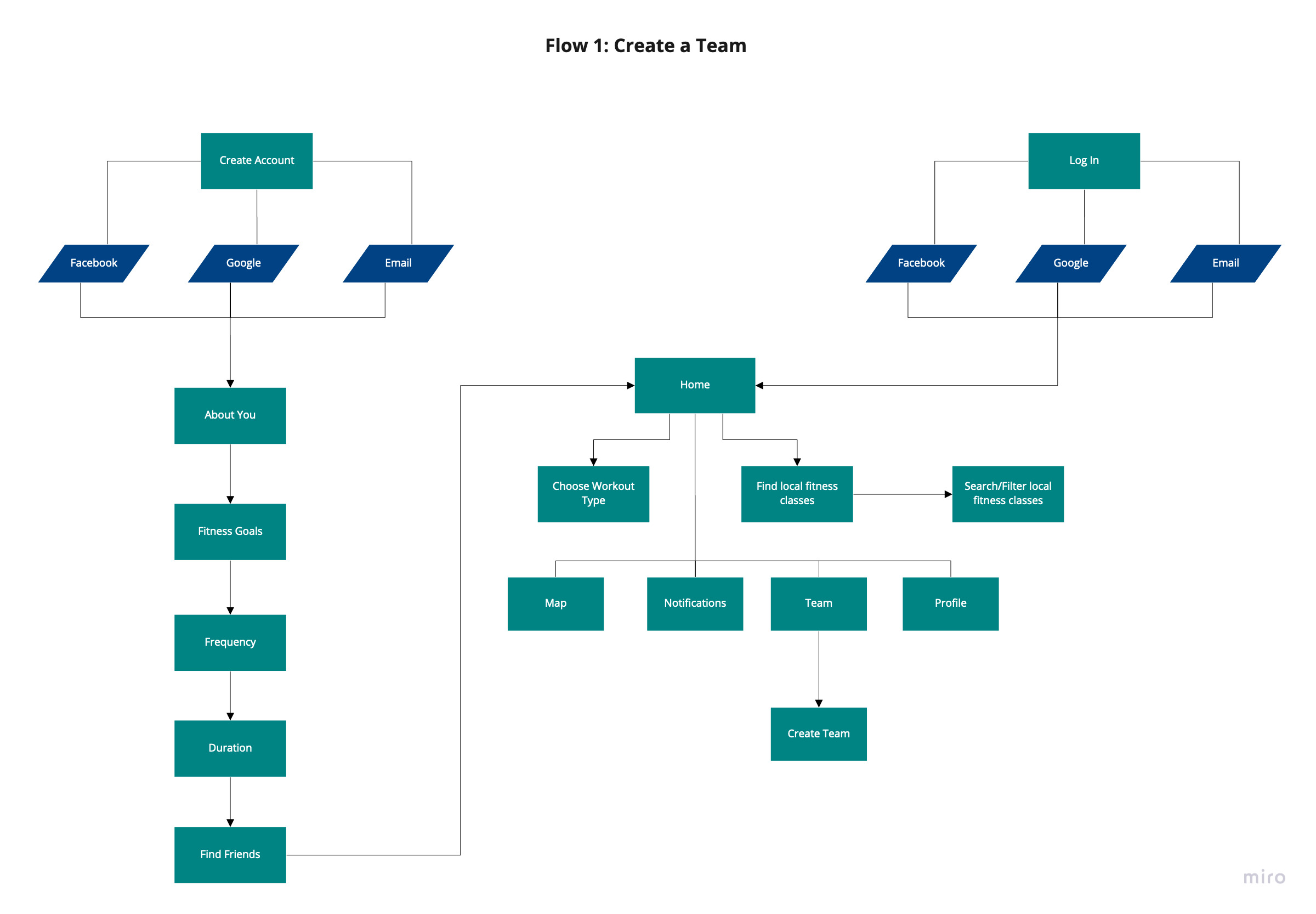 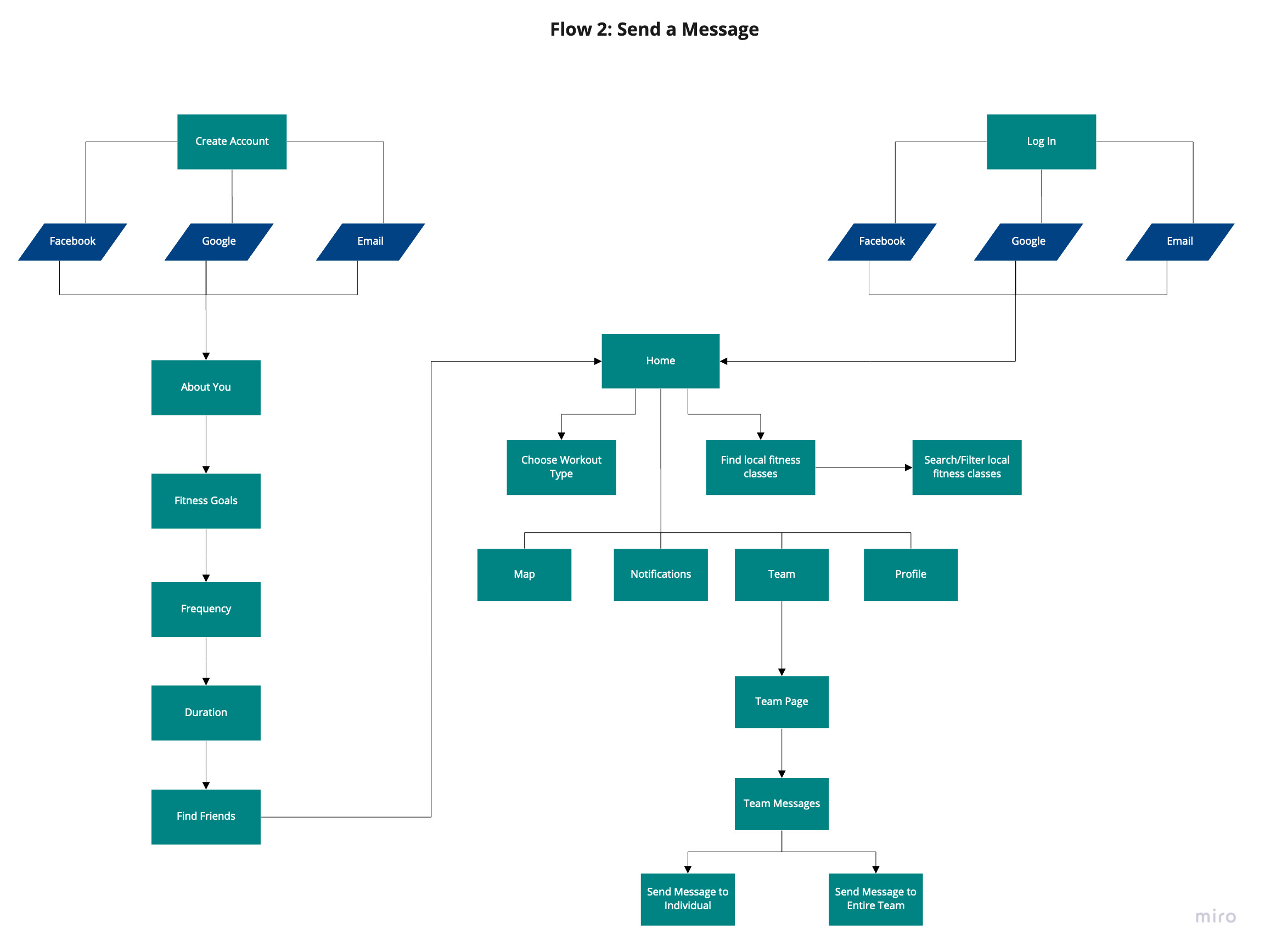 View User Flows in Miro
Following my user flows like a blueprint, I rapidly sketched out how users would achieve important tasks, like creating a team and sending a message.
Create a Team Flow 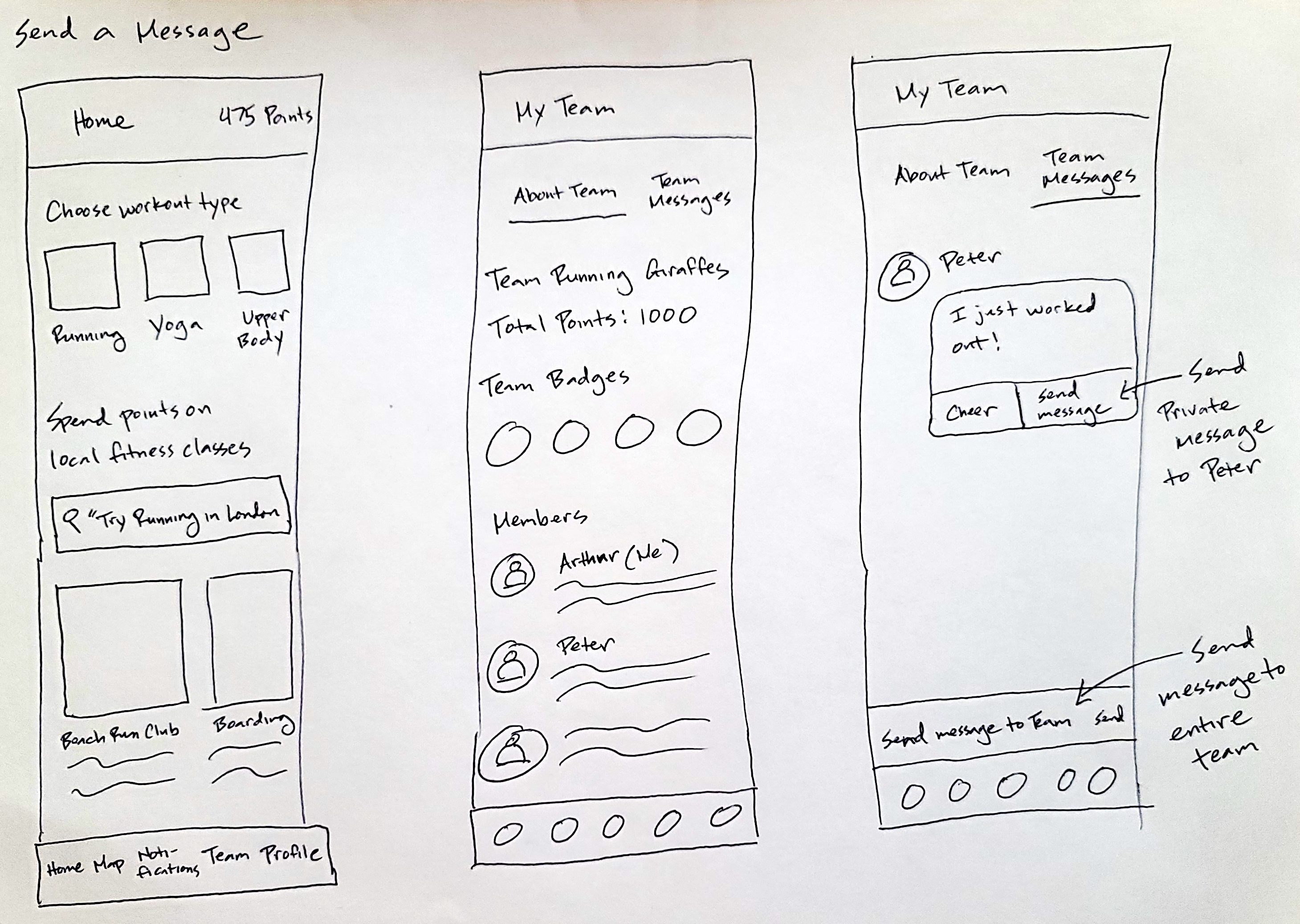 I created a low-fidelity prototype based on these sketches so that I could test how users would complete the following tasks:
1) Creating a Team

Results from Testing the Prototype - Round 1

I tested the prototype by conducting five moderated, remote usability tests in order to find out if the team aspect of the app, particularly the messaging feature between teammates, is appealing to people who care about fitness. I discovered that while it was easy to send a message to the entire team, there wasn’t a way to message individual team members outside of an automatically generated message. In order to address this problem, I created a screen in which the user can either select a person to start typing a message or tap on a recent message to continue a conversation. 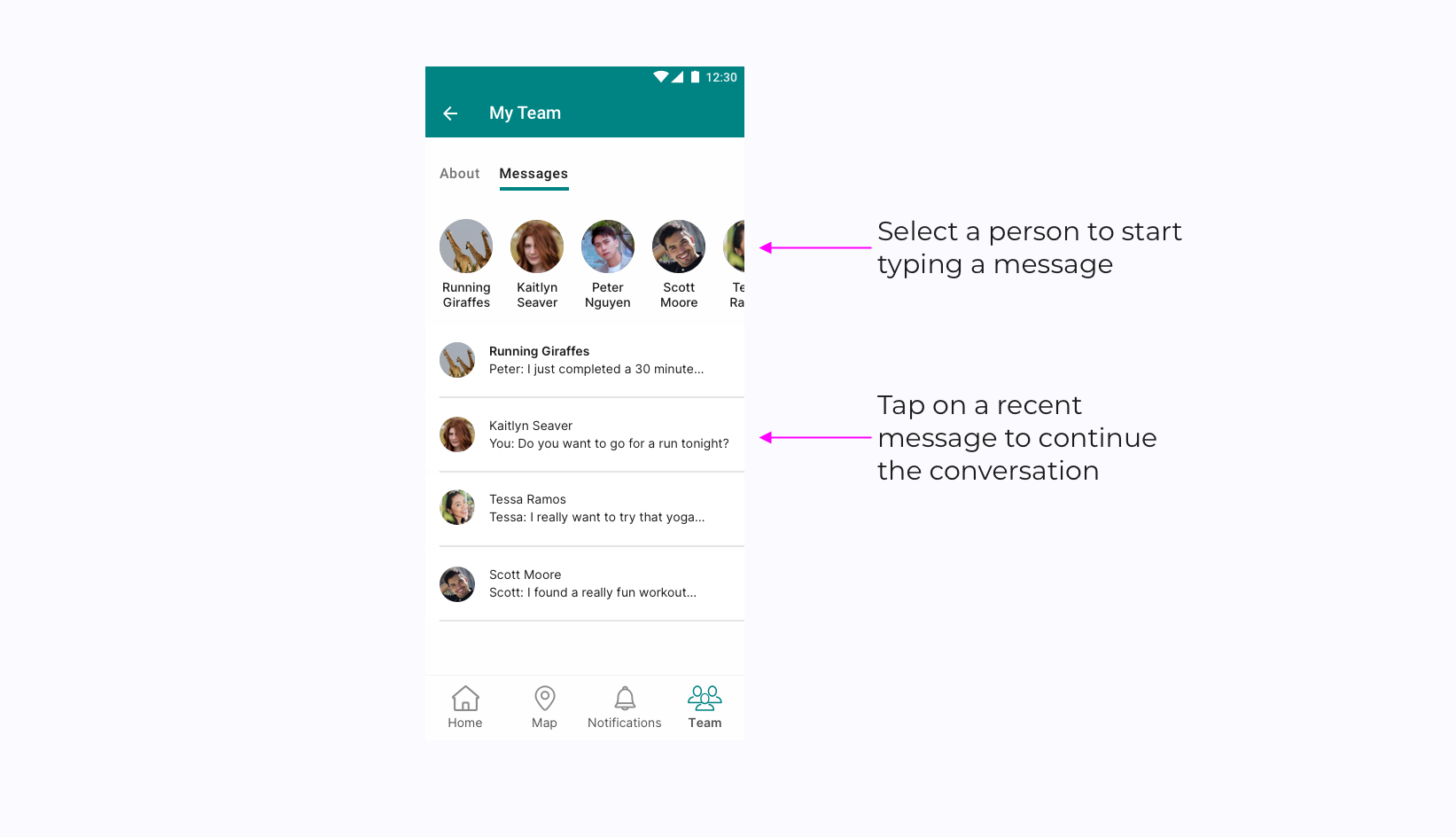 I based the app’s visual design on the following information about the FitEarner brand:
Keeping FitEarner’s brand attributes in mind, I chose the analogous colors of teal, blue, and green to form the app’s color palette. Teal is the primary color because it combines elements of both blue and green. Blue is the color of trust and reliability. Green is the color of growth and health, and it has the ability to encourage and revitalize. 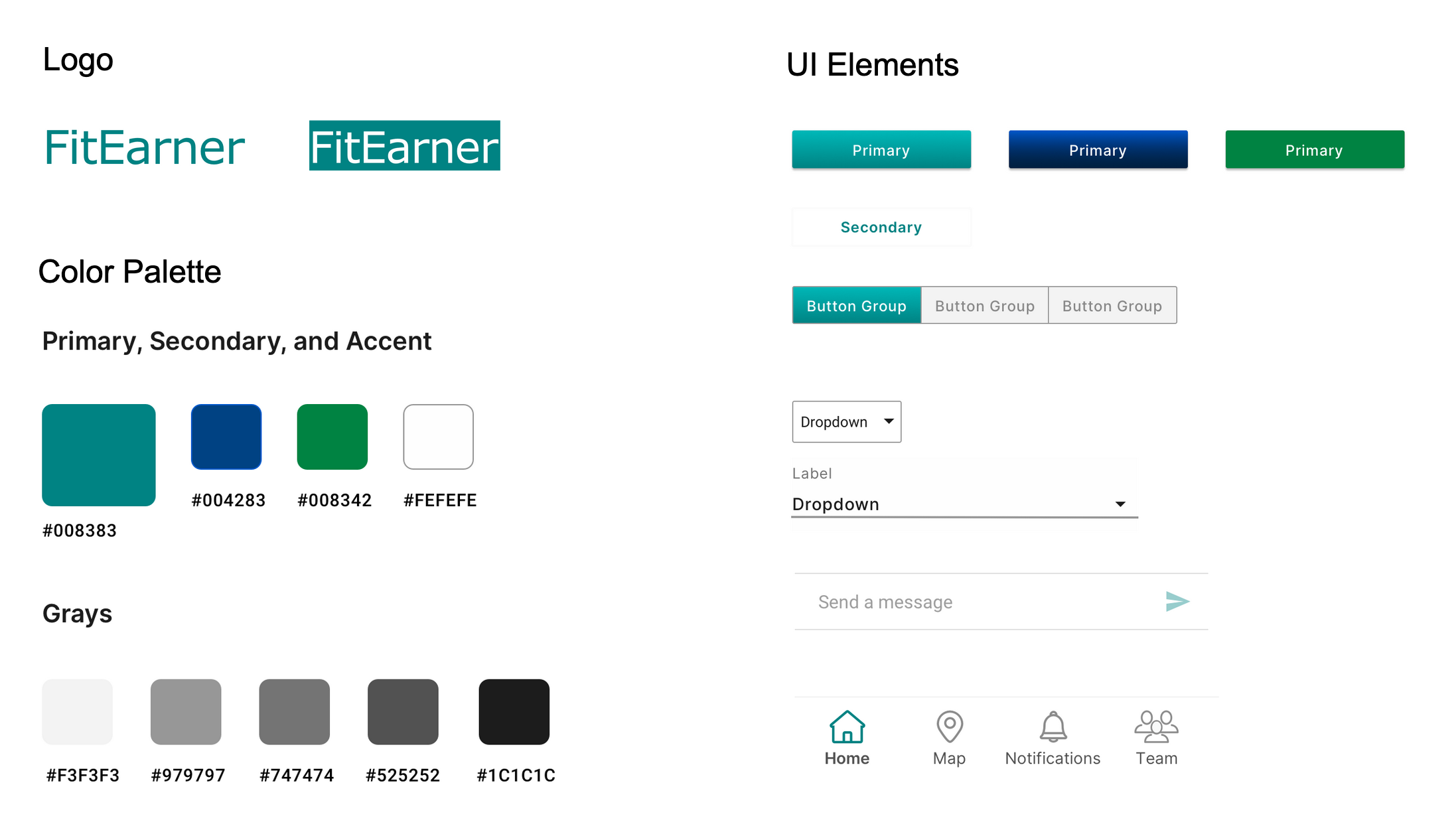 Results from Testing the Prototype - Round 2

I created a high-fidelity prototype based on feedback received from the first round of usability testing. I then conducted five moderated, remote usability tests to see if the messaging feature between individual teammates works as intended. I also wanted to gauge interest in the new messaging feature in which users can invite teammates to a fitness class. If the participants found this feature appealing, it would be incorporated as a way for users to engage more with their team on the app.

All of the participants were able to complete tasks successfully, and they provided valuable feedback:

Pre-filled messages in fitness class invitations will prompt users to engage more with the message text field. When given the task of inviting teammates to a fitness class, the majority of the participants tapped on “Invite” and then wanted to tap “Send” right away. If the message text field is already filled in with a message, it will prompt the user to change or personalize it. 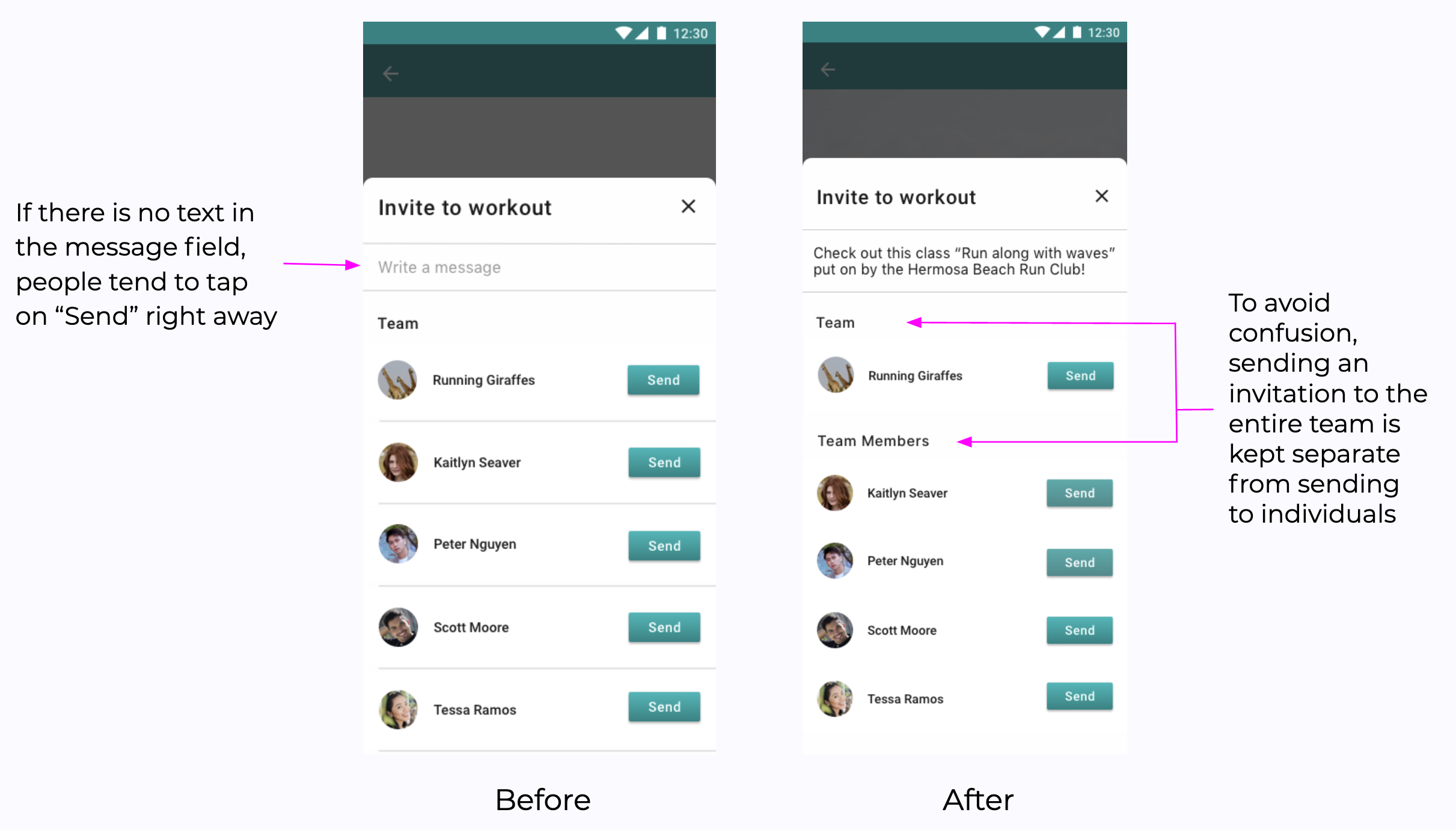 Present information in a clear manner to prevent confusion. When inviting teammates to a fitness class, there was some confusion about why “Running Giraffes” and individual teammates were all under the category of “Team.” For clarity, sending an invitation to the entire team was separated from sending it to individual team members.
‍
In the fitness class search results, the majority of participants thought that the miles listed meant that they were going to run that amount of miles. The word “away” was added to clarify that the miles referred to a person’s current distance away from the class location. 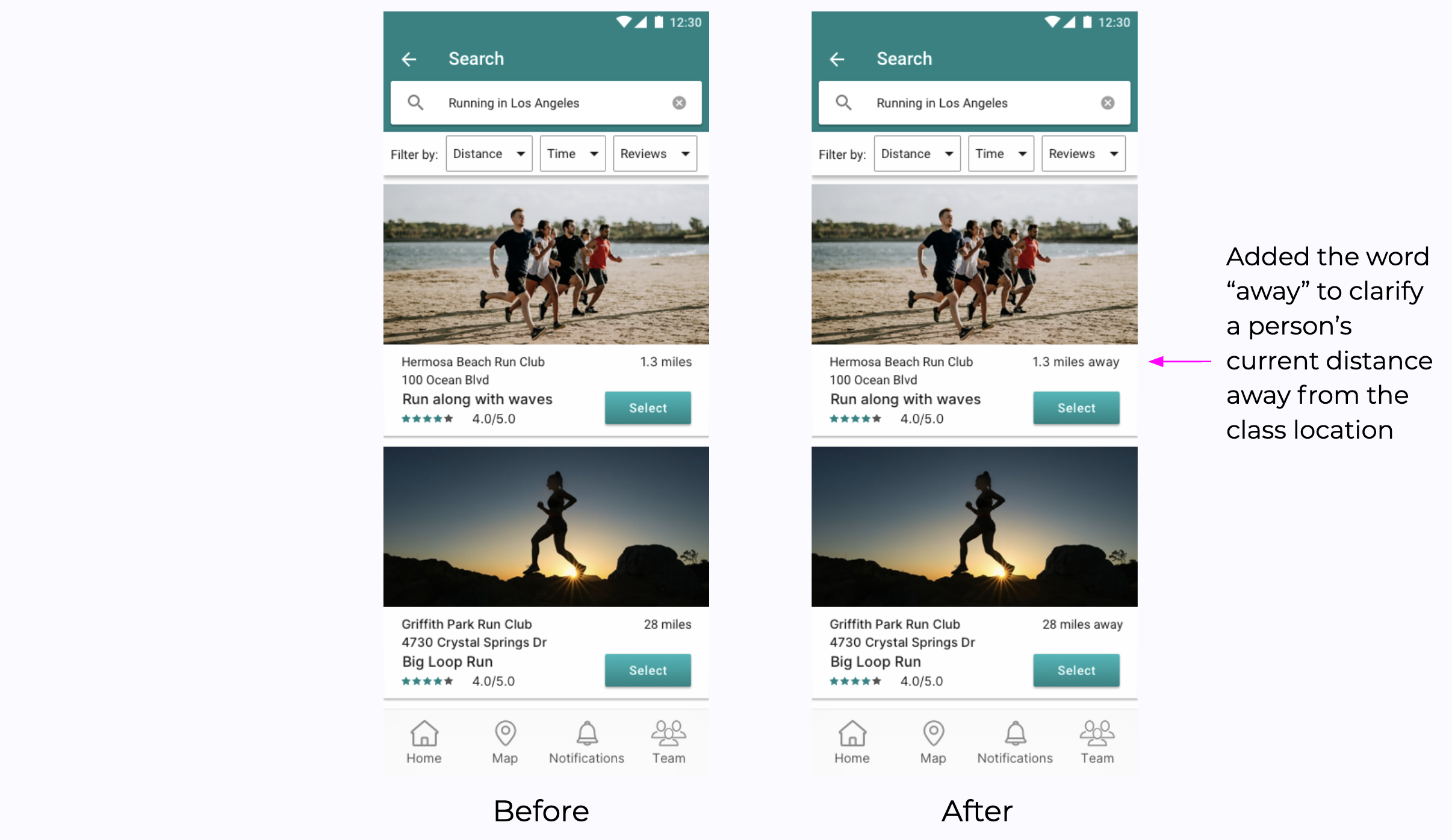 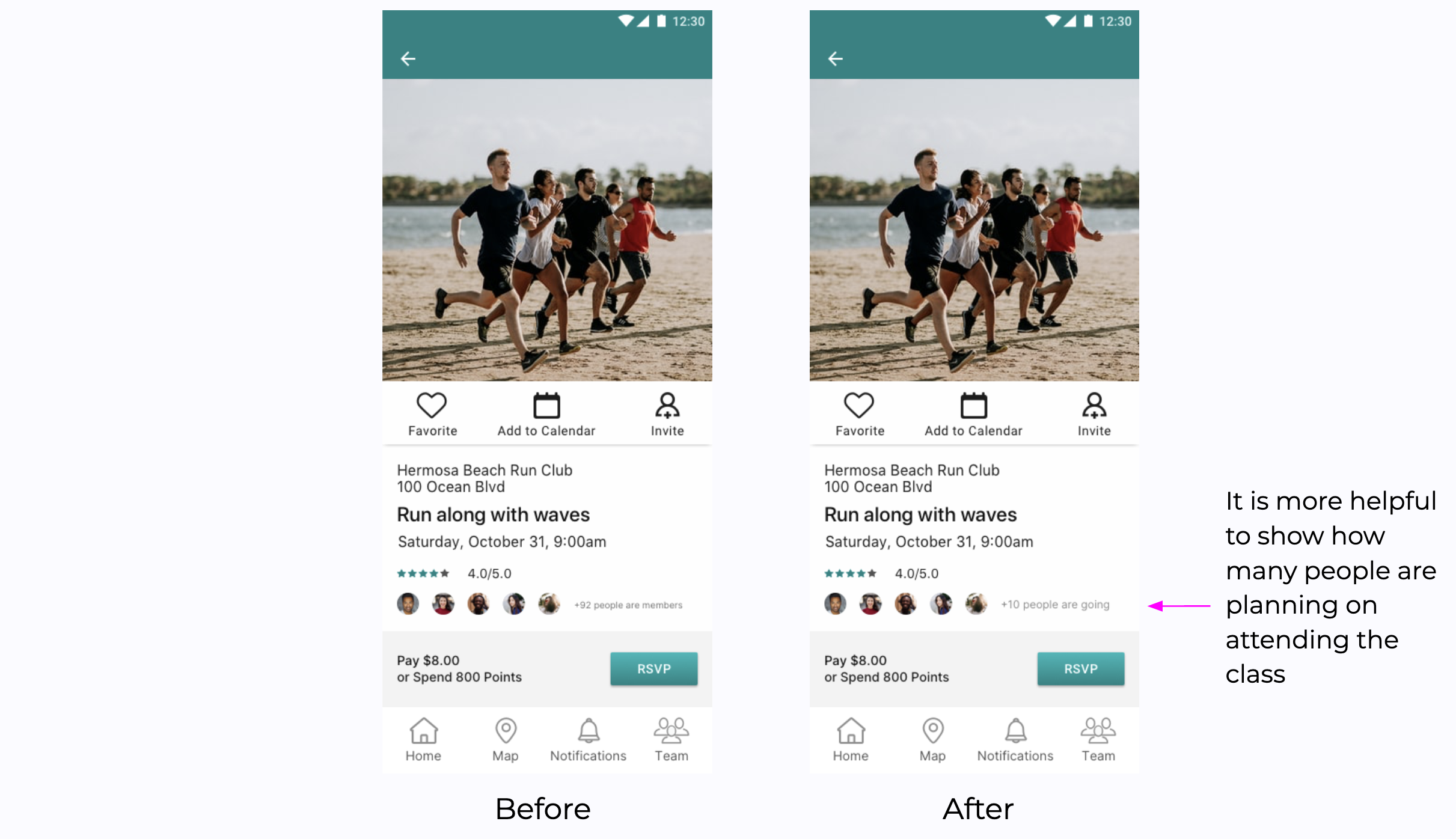 The messaging features play a key role in driving engagement and repeat usage because it encourages users to communicate often with members of their team. It can alert their entire team when goals are met, and users can invite their teammates to fitness classes through an integrated messaging feature. By doing workouts together and helping other team members discover interesting classes, users keep each other accountable and their workouts fun.
Lessons Learned
If I had more time, I would expand the messaging features to include friends outside of a person’s team. For the purposes of this project, I concentrated on a team component in which users would interact only with their group members through messaging. If a person had lots of friends on the app that were not on their team, there would need to be a general messaging feature through which they could communicate. 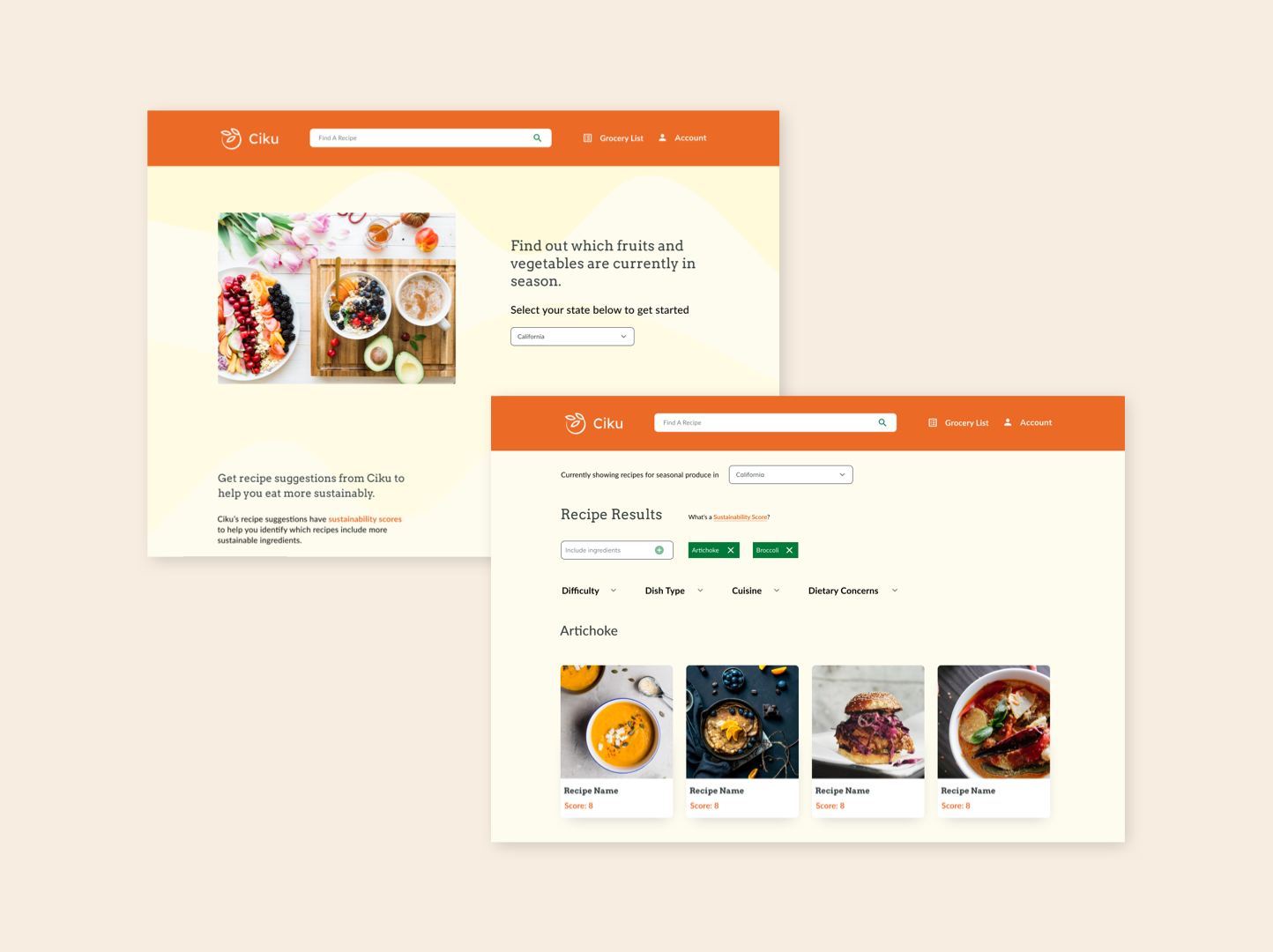 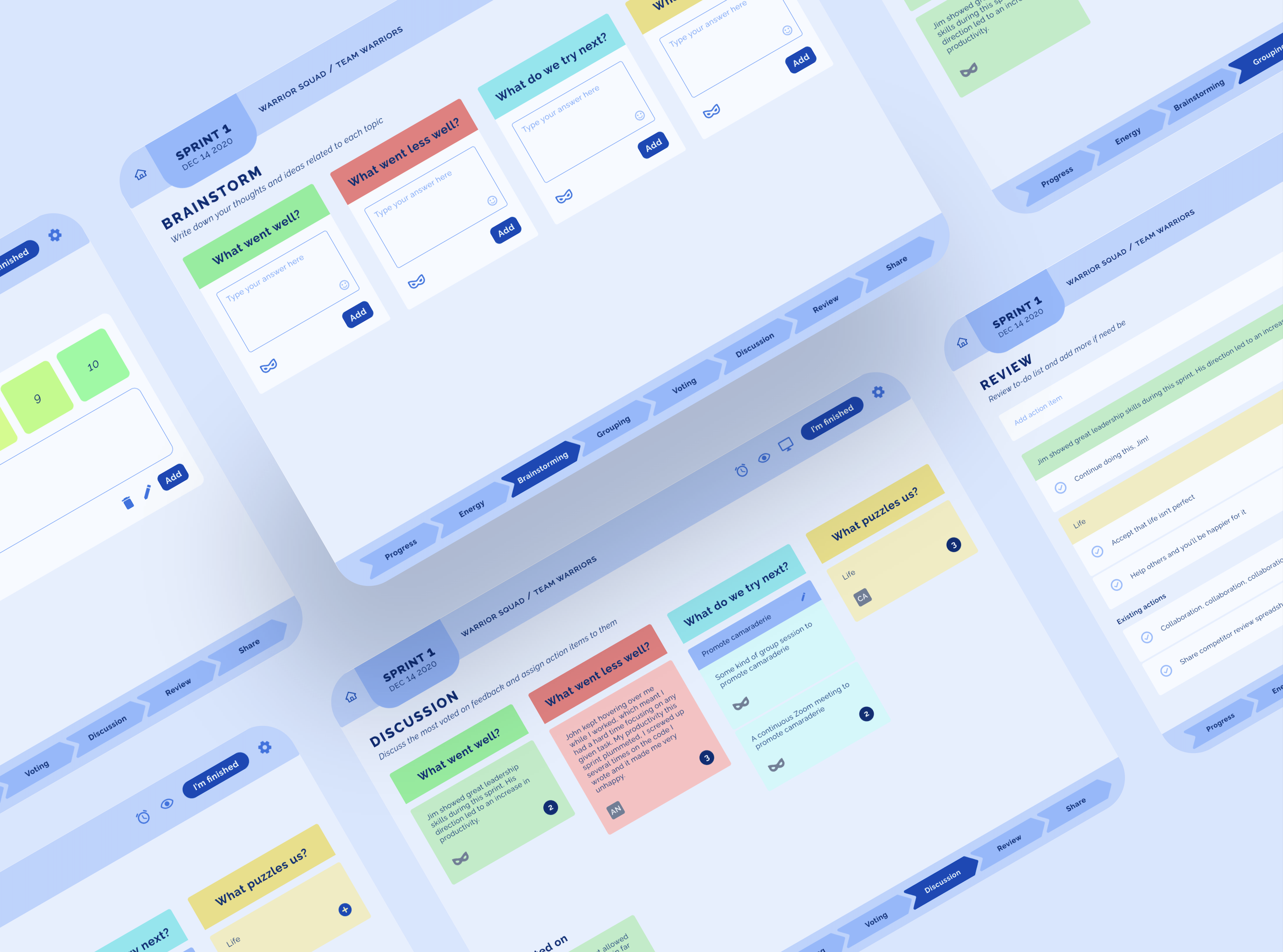 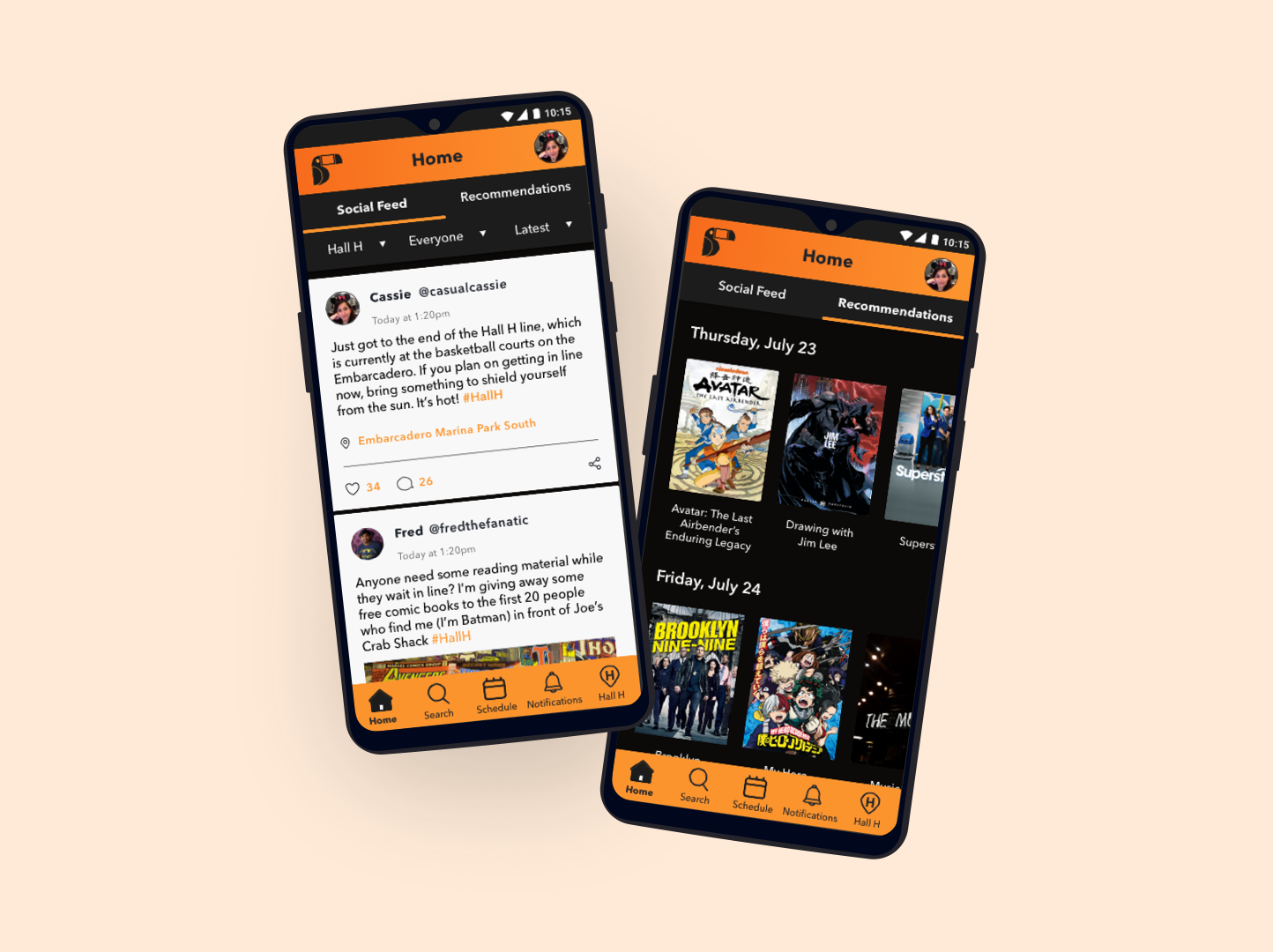